Visitor Info » Where to Run

If you arrive early and want to go for a little easy run to loosen up, this page will give you some ideas for scenic and not-too-hilly routes.

3.9 km: click for map. Starting at the Cedars Inn Hotel & Convention Centre (across from Sunnycrest Mall), head west towards Sechelt on the same side as the mall, past the stores. When you reach the Blackfish Pub and A&W turn right on to Venture Way which curves left to run parallel to the highway before ending at Payne Road.

Turn right on Payne and take the gravel path that runs parallel to the road*. Run slightly uphill to the stop sign, which is Reed Road. Turn right on Reed and keep going until the stop sign at North Road. Turn right down North Road, a nice gradual downhill to the traffic light, then right on the highway back to the hotel. You'll want to time this run between ferry arrivals (approx. 8:10am, 10:10am, 12:10pm, etc.), otherwise you'll be facing a steady stream of traffic on Reed.

*Near the beginning of the Payne Rd path you'll see a smaller path on your right, which you could take as a nice little extra loop. It circles around the 'Parkland' subdivision for about 400m and brings you to the end of Woodsworth Rd. Head left on Woodsworth (tennis court will be on your right) to get back to Payne.

5.8 km: click for map. Make #1 about 2 km longer by turning left instead of right at Payne from Venture Way, get to the traffic lights (next to Wendy's) at the highway, turn right and run along the highway (there is a wide paved shoulder) for about 800m until you reach Henry Road on your right. Go up Henry, a very gradual climb past a couple of farms, to Reed Road. Turn right and keep going on Reed to finish as in Route 1.

6.4 km: click for map. This covers the first few miles of the course. Starting at the Cedars Inn Hotel & Convention Centre, head west towards Sechelt on Gibsons Way then turn left down Pratt Road (at Wendy's). There is a nice wide gravel verge to run on. Go all the way to Chaster Road (approx. 2.4km into the run) and turn right.

On Chaster, go past the school and the fire hall and turn right onto King Road. King is mostly flat but begins to rise towards the end. Turn right at Fitchett and climb some more, then a quick left onto Veterans. One more hill then down to the highway, where you turn right (use the frontage road parallel to the highway), past PaceSetter Athletic, and continue back to the Cedars Inn.

4.6 km: click for map (less if you turn around sooner). Starting from the Cedars Inn, head left up Gibsons Way to the Bank of Montreal (traffic light). Turn left onto Mahan Road and go down the end of this short, dead-end road to the trailhead. After about 100m there is an option to turn left or go straight: go straight.

The trail starts out flat then goes gradually downhill, ending up near Gower Point, at the bottom of what's called "Gospel Rock", just over a mile from the trailhead. There is a whole other network of trails going up and around Gospel Rock but the area is under development so access is changing. Besides, it's easy to get lost in there, so just turn around and head back up the Mahon Road trail. Return to the hotel the same way you came.

Note 1: In the springtime, bears could be around in the woods so this route is best run with a partner to talk to, making noise that will scare a bear off before you get there. (Tip: Run with someone slower than you and then you won't have to outrun the bear, just the other person. And don't wear deodorant that smells like fish. Just kidding. But we're serious about the bears.)

Note 2: If it's been raining heavily you may have to navigate around a few large puddles.

3.25km: click for map. If you're exploring Gibsons Landing, you can find a network of flat and pleasant roads in what's called "the Bay Area", the residential district just west of the town, bordered by Gower Point Road, Franklin Road, and Headlands & Dougall Roads. Route starts and finishes at the Ritz Inn, near Dougall Park.

Tip: there is a very short but pleasant little trail between Harmony Lane (behind the hall) and Trueman Road (between Burns and Dougall, look for the Arrowhead Park sign). Also, Franklin Road has a smooth gravel path for a sidewalk.

Another place to run in the Landing is along the waterfront trail (packed gravel and dirt). This loop is very short (2 km) but is a nice addition to other routes. click for map

Starting at the Marina (end of Gower Point), follow the trail to your left along the waterfront, past the display gardens for a short while until you come to a detour onto the roads—head up the short steep hill, turn right at the top and then right again into Winegarden Waterfront Park.

Gentle groomed paths take you back down to the waterfront trail, which you can follow to the left towards the main wharf (it goes underneath, below Molly's Reach). Continue along the waterfront to the end at Armours Beach, where you take the winding path sharply up to Marine Drive.

Turn left and head back into the heart of the village, where you can run past the shops and restaurants to get back to Winegarden Park and beyond to the Marina or into the Bay Area as described previously.

5km, or more, or less: click for map. If you want to run a little longer, head out on Gower Point Road after touring the Bay Area, past Franklin Road, to the very scenic Gower Point itself. The road climbs gently among arbutus trees with the ocean and islands on your left, and it is well worth clambering up onto the big rock at the viewpoint to see the panoramic view. The road is quite narrow on this section but there is a small path on the verge for most of the way. (When returning, run on this same side going with the traffic, as there is zero room on the other side.) Be cautious of approaching cars, as the corners are quite blind.

If you keep going past the viewpoint the road dips down then climbs a short steeper hill before flattening out and then climbing gradually again. You will see the parking lot for Secret Beach park on your left. (The path to the beach is straight down and ends with a flight of stairs, and the beach itself is tranquil and unspoiled, with a fun-to-climb outcrop on the left.) Go as far as you like on Gower Point Road before turning back the same way.

It's pretty easy to figure out where to run in Davis Bay: the seaside promenade is a natural running route. It's not very long, so after going along it once or twice you can add some distance by heading east towards Gibsons, past/through Mission Point Park on your right (take a spin around the perimeter path), then along the highway to Field Road at the traffic light. Cross the highway and head back towards Davis Bay. Veer right onto Whitaker and continue 2 blocks to Davis Bay Road. Turn right, then left on Laurel. Climb gradually up Laurel to Bay Road. Turn left and drop back to the waterfront, then finish with a flat jog along the promenade to where you started. 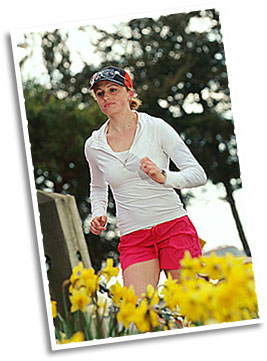