BMO Fool's Run Set for April 3rd; Register by March 15 and Save

GIBSONS, BC, March 11, 2016 — The 39th annual BMO Sunshine Coast April Fool's Run, presented by Coast Cable, will see 650+ participants running and walking from Gibsons to Sechelt on Sunday, April 3. Runners can save $5 if they register before March 15th.

At the finish, 50 children age seven and under will be racing around Mission Point Park in the Sunshine Care Network Kids' Jester Dash.

Title sponsor BMO Bank of Montreal is back for a fifth year, providing generous support in the form of cash, volunteers, shirts, souvenir items, cheering aids and team spirit. BMO staff will be hosting the second aid station, on Lower Road near Joe Road, close to the halfway mark.

“We’re excited at BMO to continue to be part of this long-running community event,” said Natasha Johal, BMO Bank of Montreal Branch Manager in Gibsons. “The BMO Sunshine Coast April Fool's Run has become the 'must-do' spring half marathon for many folks, from near and far — there's a real buzz about it. We really enjoy supporting the event as volunteers, runners and cheerleaders.”

Presenting Sponsor Coast Cable is also returning with a cash donation plus the traditional upbeat 30 minute show from race day footage, to be aired following the event. Running Room is also back on board, as are City Transfer and Mountain FM. Joining them at the Gold Level is StartLine Timing, who provides the chip-timing services and results for most of the Lifestages Lower Mainland Road Race Series. A timing mat will be placed mid-course for the first time, so finishers will see their halfway split times in the results.

The epic nature of a challenging point-to-point course, plus custom designed medals and awards, free shuttle buses, friendly volunteers, and community spirit are features that keep locals and visitors coming back year after year. After the run, participants enjoy a festive finish zone at Mission Point Park, with a professional race announcer, DJ, and a healthy selection of post-run refreshments provided by MarketPlace IGA, Wheatberries, Ty's Fine Foods, and Northstar Organic. Free digital race photos will again be provided for all participants.

“Our early registration numbers are up this year,” said co-director Teresa Nightingale. “There are also a higher percentage of first-timers than usual. Our guess is that returning participants are inviting all their friends to join the fun.”

Online donations to the Sunshine Coast Food Bank during registration are at $1350 so far and are projected to easily surpass this year's goal of $1500. After a cheque for the first $1000 was presented on February 11, Lynne Johnston of the Food Bank has this message for the participants: “It is donations like yours that enable us to continue to assist our neighbours in need. It truly does make a difference!”

The Fool's Run was started in 1978 as the result of a challenge between two local newspaper columnists. Now in its 39th year, this popular half-marathon and relay attracts more than 600 participants from near and far to run and walk from Gibsons Community Centre to Mission Point Park in Davis Bay (Sechelt). In addition, 50 children participate in the Sunshine Care Network Kids' Jester Dash. Local TV coverage is provided by presenting sponsor Coast Cable. The half marathon is race #4 of the Lifestages Lower Mainland Road Race Series, which includes 11 races in the Vancouver area.

About BMO Bank of Montreal in British Columbia

BMO Financial Group — founded in 1817 as Bank of Montreal, Canada's first bank — has been part of the British Columbia scene for over 125 years — since 1887. BMO believes in community reinvestment and corporate and social responsibility in the communities it serves; providing donations and sponsorships to groups and programs that help build and sustain resilient and healthy communities. BMO is the bank for runners in B.C. — sponsoring the BMO Vancouver Marathon, the BMO Okanagan Marathon, the BMO St. Patrick's Day 5K and the BMO Sunshine Coast April Fool's Run. Visit us at www.bmo.com 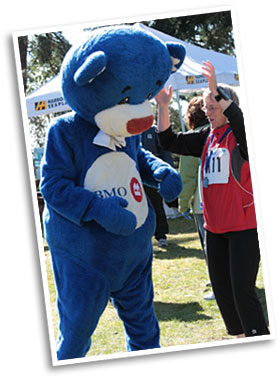